History of the Spiral Staircase

When you picture a spiral stairca 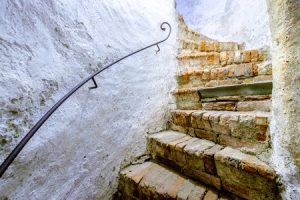 What Was Their Purpose?

Spiral staircases served a very specific purpose when they were first developed and implemented. Spiral staircases were originally built as a form of protection within certain kingdoms. The staircases were often built into castles and were used as an advantage when kingdoms faced an attack. Different armies would use the spiral staircase when enemies would make an attempt at an ambush because they provided a limited amount of space which prevented a group of people from running up it at one time.

What Materials Were Used?

When spiral staircases were first created, they were typically built out of stone or marble because they were built directly into walls. It took some time for them to become “freestanding structures” with a center pole as support. They are now made in a variety of materials from steel to diamond plate.

Why Do We Still Use Them?

As you probably know, spiral staircases are still a prominent structure in many homes, apartments, and commercial spaces. They are used in order to save space, but they are also used as to provide a captivating focal point as a timeless structure.

Spiral staircases are both an elegant and practical addition to various spaces. If you’re looking to add a custom spiral staircase into your home or business, contact Acadia Stairs to get started.