Stairs have made visual impacts on your life in more ways than one. Ghostbusters, Gone with the Wind, Rocky, Home Alone, Psycho, The Untouchables and The Shining. These movies all have something in common and it’s not just that they have great acting and are some legendary movies of their generation. The common theme in these movies is that they have amazing scenes that involve the use of staircases. 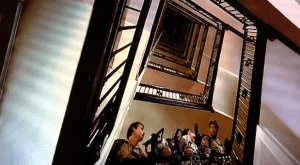 The utilization of stairs not only compliments the epic scenes in films, but also makes them seem like they are a character in the story. Memorable stair scenes create and evoke a wide array of emotions to the audience.

Who doesn’t shed a triumphant tear when Rocky runs up the famous stairs of the Philadelphia Art Museum? The cringe you get when the house robber, Marv, steps on the nail planted on the basement stairs by Kevin in Home Alone. The elaborate, beautiful view of the stairs as the Von Trapp family sings “So Long, Farwell” in The Sound of Music. And in the Ghostbusters when he is asked where the stairs go, Bill Murray’s character says “They go up!”

The heroic sword fight on stairs in Robin Hood makes you cheer for Robin to defeat his adversary. While your heart goes out to Cinderella, as she loses her slipper on the castle stairs, to hide her true self from Prince Charming.

Check out this video of 100 famous stair scenes in 100 Movies:

It’s not just the acting and the movie’s success though. It’s the magical combination of the camera and the director, which showcases the stairs in a certain light. As you evaluate the stairs in the scenes, they are unique in their own right.

Some of the staircases used are architecturally fascinating, while others seem plain and functional. It’s not clear who designed the stairs in every movie shown, but one fact is clear that they bring a certain enchantment to the viewer.

Look at Alfred Hitchcock’s contribution to the staircases in movies:

The infamous director of horror, Alfred Hitchcock, reinvented the way stairs are filmed. These techniques are still used across film making today. In Psycho where he has the police officer is stabbed and then falls down the staircase, Hitchcock has you follow in a second person view just like you are falling down the stairs with him. You see the characters fright and imagine yourself in that type of situation.

Of course no one wants to know what falling down the stairs feels like. Especially if the stairs are made of stone and there is a long way down because that would hurt. That’s where the imagination comes in and you let your thoughts run wild. Leave falling down the stairs to the stunt professionals.
As you can see in all the films that the stairs are just a piece of the overall puzzle, but are still fun to show. It makes you think if the stairs were purposely made for the movies or if they were just found by someone who had the idea that they should be used.

Could newer designs of stairs still have the same effect? And are the stairs still in use today? Answers to these questions would make for quite the adventure.

Looking at stairs in a different way is what drives the creative juices in our brains. They have the obvious benefit of giving you a way of traveling from one floor to another with ease. But have you ever looked at the staircases you encounter in your daily life and wondered what stories could they tell?

In your travels, really take a look around at the unique staircases you encounter. Perhaps one day you might see them a movie and say to whoever is closest to you, “I walked those stairs once!”