The Evolution of the Staircase 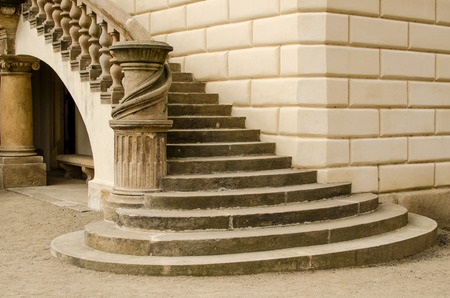 Most of us probably haven’t spent too much time on our staircase, wondering who invented the staircase and how it became a practical form of transportation from one level to another.

Staircases actually have a rich history, and although Acadia Stairs develops custom metal staircases to complement your exterior and interior space, staircases have been around for centuries.

The earliest “staircase” dates back to the first human structures ever created. Most staircases took the form of either flat rocks or logs that were stacked to allow easier access into a home, typically a cave. Eventually, staircases became a bit ornamental while still remaining functional, in ancient Egypt.

Architecture Week  credits human instincts for the various design changes in staircases over the years along with the purpose of staircases. While it’s true that from culture to culture, the overall design of staircase have changed over the decades, certain shapes and styles remain strong.

There are also references within literature and history books that stairs represented a quick and safer way to escape danger. If a stairway was created in the wilderness before industrialization, they could typically be found in a highly-trafficked portion of the woods. They were created in locations where someone might have needed to get over an obstacle, and didn’t want to spend time going around to get where he or she needed to be.

In China, the first granite staircase believed to be created led to a sacred mountain, which suggested that stairs were also used to ascend to certain sacred areas for religious purposes. Staircases often could be built towards the sky, which indicated for many cultures getting closer to the heavens.

It is believed that the spiral staircase resulted from military practices. Soldiers who defended their castles took strategic position at the top of the spiral staircases within them. Their right hands were free, while their left steadied themselves on the wall, and the lack of railing meant that it was easy to push one’s opponent down the stairwell.

It is wild to think about how much staircases have changed over time and the many purposes they have served over the years.

To learn about the custom staircases here at Acadia Stairs, call us today at 845-765-8600 or visit our website.