The ‘Holy Stairs’ Revealed for the First Time in 300 Years

There are few staircases around the world that carry as much cultural and religious significance as Rome’s Holy Stairs.

The stairs, also known as the “Scala Sancta,” are at least 2000 years old, but for the past 300 years they’ve been covered for protection by a walnut wood encasement. However, just earlier this month, the stairs have been revealed as the wood is restored, allowing visitors the chance to walk on the original marble for the first time in 300 years.

The History of the Holy Stairs 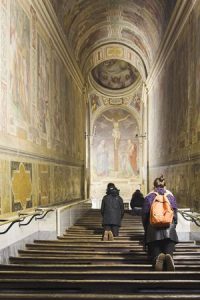 Roman Catholic tradition holds that the ‘Holy Stairs’ were the same marble staircase that Jesus climbed in Jerusalem, on his way to his judgment before Pontius Pilate. They were moved to Rome in 326 C.E. by St. Helena, the mother of Emperor Constantine, and they’ve been there ever since. Years of pilgrims and visitors, though, caused the steps to sink and bend, leaving furrows in the marble. This led to its encasement in 1723.

The decision to remove the wood encasing is actually a part of a 20-year project to restore the entire 16th-century sanctuary in which it’s housed. As they removed the wood, restorers found coins, photos, rosaries, and hand-written notes left by pilgrims over the past 300 years. As the wood is being restored, the stairs will remain bare, but only for a short time. The staircase will be re-covered by June of this year.

Holy or not, every staircase can inspire and awe. Take a look at our designs to see how our custom staircases can transform your space.

"Acadia Stairs came through for us without a hitch... The price was very reasonable and our new stairs are beautiful! We highly recommend this company!"
Jean Locke Raymond
Learn More