A History of Spiral Stairs 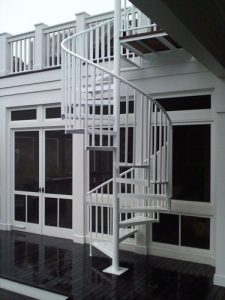 Spiral stairs add an interesting design element to almost any building. From homes to modern offices to centuries-old buildings, spiral stairs are a classic feature that can add elegance and class to any environment.

While you can still find spiral staircases being built into new buildings, their lineage dates back more than 3,000 years. In Biblical history, two spiral staircases are said to have been part of Solomon’s Temple, leading to a sacrificial altar. While one of the first written accounts, the temple stairs are only recorded in stories.

When it comes to actual staircase remains, the earliest example comes from a temple in Sicily that is believed to have been constructed around 480-470 B.C. These stairs, like many other ancient designs, were centered on a central column that was crafted out of stone with stone slabs constructed around to build stairs.

A more common design began to appear around 500 years later. Trajan’s Column in Rome – a monument to victory that was built around 113 A.D. – still stands today and is widely considered the oldest preserved spiral stair structure in the world. It features a base built of marble with stairs wrapped with reliefs depicting the victories of Trajan’s army in war.

Spiral staircases continued to be used in different types of designs building off the early Roman architecture. Castles and churches, in particular, used spiral staircases in a variety of ways as they utilized large amounts of stone in their construction.

Spiral staircases continue to be popular still today. They are used in a variety of places and can be a welcome addition to any building, adding a feeling of uniqueness to any design.

At Acadia Stairs, we can add a spiral staircase to any building. We specialize in all types of stairs and can help recommend the best one for your building, whether it’s a traditional staircase, a butterfly design or any other variation. If you want to accentuate your building with a unique staircase, give us a call today at 845-765-8600.