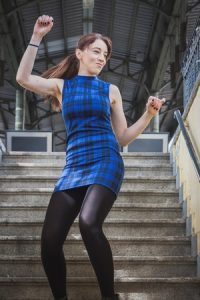 In the last blog we touched on how there’s a new staircase building boom and that using the stairs is proven to be healthy for you. Well what if you could have fun using the stairs? Who remembers how much fun running a Slinky up and down the stairs was as a child? A simple invention but how many hours were spent at your house’s steps seeing if you could successfully get the Slinky all the way down the stairs or racing your friends with their Slinkys.

Well there are a couple videos that we want to share with you that show off stairs in a fun, creative way and one staircase video that would be great if it was true.

In the first two staircase videos you see similar ideas, which was to create a piano out of the stairs that are used in public. The third was from R.I.T. and is comparable to the Penrose Stairway.

Both of these videos can bring a smile to your face and also are there to enlighten you into creating a better health environment, compared to the escalator next to the staircases.

In this first video created by TheFunTheory.com, which is an initiative started by Volkswagen, they do a study by engineering a piano staircase in order to see if the stairs could be used more often than the conjoining escalator.

As you can see in the video the theory worked, and the people who walked down the stairs used it more often than the escalator and had fun doing it. The video captured the amazement as people realized what they were walking on and you could see the entertainment it caused.

And even in the second video from ThiSWhaTCalleDAwesom, filmed at the Sylvia Park Mall in Auckland, NZ, they try to promote health with their piano staircase as well.

Same premise behind both videos; get people to use the stairs because the pianos make them fun to go up and down, but secretly because it promotes heath. It’s almost like they are tricking the public into thinking that the stairs are a toy.

This video would make for a legendary staircase if only it was true. In an R.I.T. “Can You Imagine” web series made by Michael Lacanilao, who was a grad student at the time. He got many people involved to create the illusion, that there was a mythical never-ending staircase on campus.

Though the staircase video was later debunked, still the creativity to imagine such a story and mystify watchers of the video makes the entertainment worth it while it lasted.

You can now see why stairs are fun just like we do. Stairs can be functional but also have a purpose. What other things can be fun on stairs? Take a video and let us know on Facebook or Instagram!