The World’s Most Famous Staircases

Staircases aren’t just something that can get you from point A to point B; they’re also works of art that can last for hundreds, if not thousands, of years. Some staircases are so well-known that they’ve become popular tourist destinations, with people from around the world coming to see them each year. Here we go through some of the world’s most famous staircases, their history, and what makes them so unique. 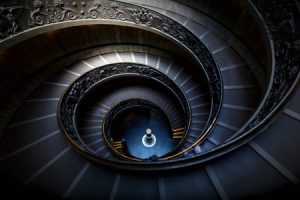 Despite their name, the Spanish Steps are actually located in Rome. Designed by the architect Francesco de Sanctis and financed by the French diplomat Étienne Gueffier, they were built between the years 1723 and 1725 in order to link the Trinità dei Monti church and the Spanish Embassy just below it. Both the Trinitià dei Monti and the Spanish Embassy were under the patronage of the Bourbon dynasty, a European royal house originating in France, but extending to Spain by the 18th century. Once it was completed in 1725, the Spanish Steps had a total of 174 steps, costing Gueffier a total of 20,000 scudi.

The Great Fire of London began in a baker’s house on September 2, 1666. It lasted a full three days, consuming practically every part of the city that was inside the old Roman city wall including 13,200 houses, 87 churches, St. Paul’s Cathedral, and many of the city’s official buildings. Five years later, in 1671, the city constructed a monument to commemorate the Great Fire. It took six years, but the end result was a giant Doric column with an interior spiral staircase that stretched up to 160 feet tall. With 311 steps, the Great Fire Monument has nearly double the number of steps as the Spanish Steps, and it’s topped with a gilded urn of fire.

There’s a reason this staircase is considered one of the steepest in the world. With a nearly 70% incline, getting up and down the Angkor Wat Temple Stairs can be both exhilarating and terrifying, as it’s meant to be. The steps to the temple are meant to remind people that reaching the kingdom of the gods is not a simple task. However, once you reach the top, you will be rewarded with an amazing view of the temple and its brilliant Buddhist features.

Designed by Giuseppe Momo in 1932, the Vatican Museums’ spiral staircase is perhaps one of the most widely photographed staircases in the world. The staircase actually has two separate helixes—one that goes up and one that goes down—representing a double helix formation similar to that of DNA (however, since DNA wasn’t discovered until the 1950s, this was certainly not the original intent). The staircase is also very broad, making it seem more like a ramp than a usual staircase.

Led Zeppelin wasn’t talking about these specific steps when he sang about a “Stairway to Heaven,” but when climbing up Heaven’s Gate Mountain in China, it’s hard not to imagine it as one. With exactly 999 steps (the lucky number in Chinese numerology), the staircase climbs up almost 24,500 feet to the top of Tianmen Mountain. There people are met with the “Gateway to Heaven,” a cave that was formed in 263 C.E. when one side of the mountain collapsed. Then, at the summit of Heaven’s Gate Mountain is Tianmenshan Temple. Built in 870 C.E. as a Buddhist temple, it was destroyed during the Chinese Civil War (1927-1949) but was later rebuilt in 1949 near the end of hostilities.

Whether it’s for a monument or for your home, a staircase can be a true work of art admired by all sorts of people. If you’re interested in adding a beautiful custom staircase to your home, then contact Acadia Stairs to see how we can help.