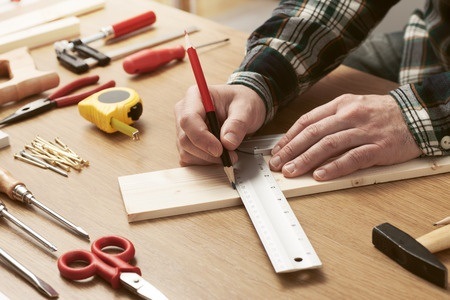 Since the start of the Middle Ages, young tradespeople in France called “compagnons” have spent years mastering their crafts in a secretive and mysterious fashion. Those interested in working with materials like stone, metal, leather, textiles, and often traveled to learn skills from masters in their field. And at the end of the process, they earned initiation into a select group of tradespeople by completing what is called a “masterwork.” A masterwork is meant to show off all the skills a tradesperson picked up over the course of five years studying as a compagnon.

Many times, those studying to become woodworkers choose to create tiny staircases as their masterwork.

In order to make their staircases, compagnons have used a wide range of different woods, including everything from ebony and walnut to pear and mahogany, as well as hand-railings made out of things like brass and bone. They’ve hand-cut hundreds of tiny pieces of wood to put their miniature staircases together and have specialized in carving the woods into many small shapes to make the staircases look intricate and beautiful. This has all traditionally been done in an effort to illustrate what these young compagnons had learned how to do during their educational journey.

An art dealer named Eugene V. Thaw, who passed away at the age of 90 in early 2018, was the owner of a gigantic collection of tiny staircases manufactured by compagnons. Many of the staircase models he owned were created sometime between the 18th and 20th centuries. The self-supported structures were part of a permanent collection that was put on display at the Cooper Hewitt, Smithsonian Design Museum in New York, and they showcase just how far compagnons were willing to go to prove their abilities as tradespeople. Their staircases were proof of their talents and accomplishments as woodworkers.

Much like the compagnons who have studied in France for centuries now, Acadia Stairs takes great pride in the unique custom staircases we’re able to create. We would love to show you what we can do by customizing staircases for your home or business. Call us at 845-765-8600 today for more information on our custom staircase designs.