The Mystery of the Miraculous Staircase of Loretto Chapel 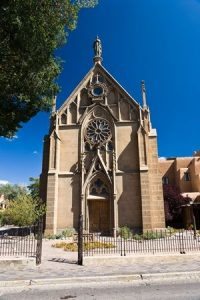 A beautiful spiral staircase that boasts two 360 degrees turns, the Miraculous Staircase of the Loretto Chapel is surrounded by much mystery. One question that still baffles carpenters today is,

“How does it stay standing with no visible support system?”

Now a private museum, the chapel was built between 1873 and 1878 in Santa Fe, New Mexico. This gothic-style masterpiece was created as an addition to the Academy of Our Lady of Light, a girl’s school run by the Sisters of Loretto. With gorgeous stained glass windows shipped from France, the church was a thing of beauty. The only problem was that there was no way to build a staircase to the choir loft that wouldn’t interfere with seating.

“Legend says that to find a solution to the seating problem, the Sisters of the Chapel made a novena to St. Joseph, the patron saint of carpenters.”

On the final day of their prayers, it is said that a carpenter appeared at the chapel looking for work, constructing one of the most beautiful staircases of all time. After the staircase was finished, the man disappeared without his pay.

Since the staircase was built, there have been many questions about its construction and the mysterious carpenter who was able to build this incredible work of art with just the simple supplies in his toolbox. The staircase is said to be created with wooden pegs instead of nails and the nature of the wood itself has been the subject of much scrutiny in recent years.

Richard Lindsley, who ran the chapel between 1991 and 2006, was interested in learning more about the staircase and decided to send a sample of the wood to a California scientist, Forrest N. Easley. It took Easley months to return his results, which were quite puzzling. The wood sample was a type of spruce that matched nothing in scientific record. More than that, the dense, square molecules of the wood made the scientist believe that it came from trees that grew somewhere very cold; much colder than New Mexico.

From the identity of the carpenter to the way the stairs were built and the material they were made of, there are many questions surrounding the Miraculous Staircase of the Loretto Chapel. The one thing we do know is that this staircase is a beautiful work of art, worth visiting if you are ever in the Santa Fe area.

Interested in having a spiral staircase of your own installed? Acadia Stairs can fabricate the ideal staircase for your home or business whether you are looking for an interior or exterior design. Check out our online gallery and give us a call at 845-765-8600 to get started on your project today!